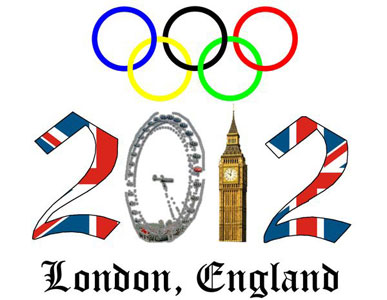 The Olympics absorb the culture and the attitude of their host nations and cities. The London look is appropriately Beatles-esque and British. 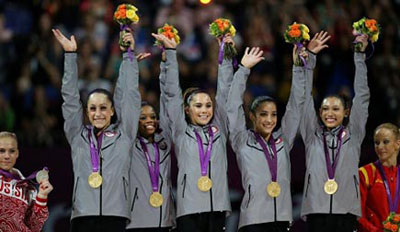 Called “the Fab Five,” the U.S. women’s gymnastics team didn’t have a hard day’s night as they marched toward Olympic Gold. 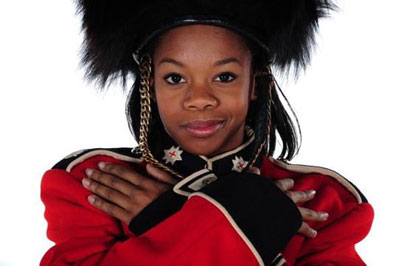 Gabby Douglas is one of the breakout stars of the 2012 Olympics. The pint-sized U.S. gymnast would be the ideal candidate for a sports doll—complete with London-centric costumes. 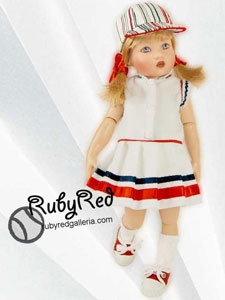 Sports costumes can turn any doll into a first-rate, adorable athlete. Helen Kish’s “Riley” doll looks aces in her Ruby Red Galleria ensemble. (Outfit is sold out on the site.) 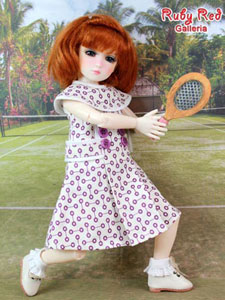 Available on the Ruby Red Galleria site, the “First Tennis Set” turns this InMotion girl into a formidable player. 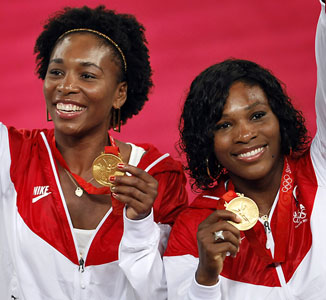 The Williams sisters are proud to represent America in the Olympics. At Beijing, they struck gold. Will they repeat in London? 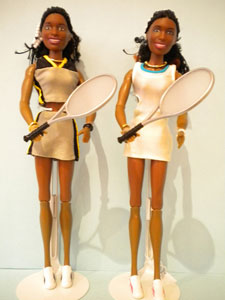 In 2000, Play Along Toys enshrined the Williams sisters, Serena and Venus, as fashion dolls. 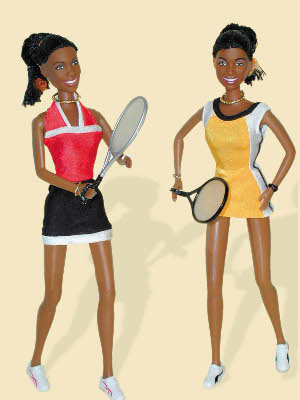 Known for their fashion smarts on and off the court, the Williams sisters were the perfect match for being made into dolls. 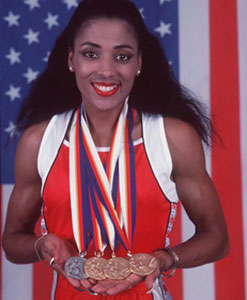 The late Florence Griffith-Joyner, known as “Flo Jo,” was a legendary track-and-field athlete. She is still considered to have been “the fastest woman of all time.” 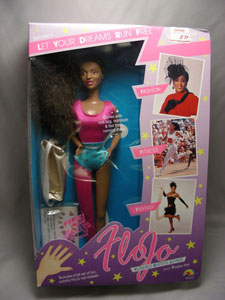 The “Flo Jo” doll capitalized on her good looks, fashion sense, and medal-winning athletic abilities. The tag line for the doll is the life-affirming: “Let Your Dreams Run Free.” 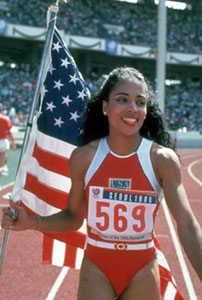 Florence Griffith-Joyner set the bar high at the 1988 Seoul games. Track watchers wonder if her achievements in the 100-meter and 200-meter races will ever be matched. 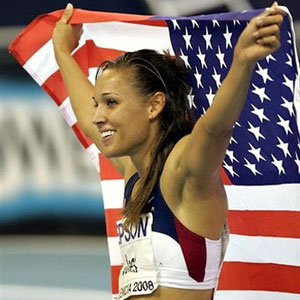 The track athlete who is wearing the mantle of media scrutiny for 2012 is America’s Lolo Jones. Her specialties are the 60-meter and 100-meter hurdles. 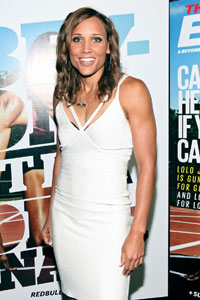 When she is attending magazine events and walking the red carpet, Lolo Jones gives Barbie a run for her money!

What’s great about this four-year spectacle is that the games seem to absorb the nature and nuances of its host nation. This time around, the setting is London, England, and the usually bikini-clad volleyball girls are playing for their medals in what look like Roaring 1920s bathing suits (“Boardwalk Baby,” anyone?) or skin diver wetsuits converted for land use. Sure, the British have had their fair share of stormy, sexy interludes (real: Henry VIII’s merry-go-round of wives, the 1960s Profumo Scandal, Randy Andy’s Koo Stark, Hugh Grant; imaginary: Lady Chatterley and Bond, James Bond). But, by and large, the Brits are known for their decorum, their elegance, and their stoic determination to keep a stiff upper lip and get on with it. (Did you see how stone-faced Queen Elizabeth was during the opening ceremonies? Even watching the playback of her supposed parachuting from a helicopter, she didn’t crack a royal smile.)

It’s been enjoyable to rubberneck and spot Wills and Kate and Harry in the various stands around the sprawling sports complex (a Royal “Where’s Waldo?”), and it’s been delightful to see that the two young scions of the House of Windsor are still far enough away from the throne to hoot and howl whenever England does better than expected and lands a medal. (And then gets unexpected Silver Medal reduced to a Bronze, courtesy of a bureaucratic protest! The British men’s gymnastics team took the news and the demotion with grace under pressure. They didn’t show any scorn or fury. Queen Elizabeth would be proud.)

The Olympics are a chance for all the citizens of the world—the third in line for succession, as well as the 3,000th—to kick back and ogle as godlike specimens shatter records and receive tribute. Only in the Olympics could a six-foot-one teenage girl be considered an underdog!

For doll lovers, the Olympics can continue to play on long after the torch is extinguished. There are so many dolls that can be bought, costumes that can be found, and eBay auctioned sets that key into everything active and athletic.

While the event seems to be produced as a two-way global competition between the United States and China (as far as the medal count goes), the number of young people who have shown up to represent their countries and who have dedicated themselves to discipline and good sportsmanship raises everyone’s spirits during these sometimes soul-sinking times. If you ever wonder if the world is being left in good, future hands, take a look at most of these athletes and you’ll know that personal sacrifice and improvement still go hand-in-hand.

Will the “Fab Five,” the quintet of American girls who snagged a Gold in team gymnastics, be made into dolls? It’s quite possible that some company or customizer is already hard at work sculpting a Gabby Douglas or a Jordyn Wieber likeness. The United States hasn’t sported a Gold in the team event since 1996.

Dolls of these competitors—as well as past headliners—allow collectors to hold a tiny slice of history in their hands. We may never be able to run a 4-minute mile, but we are able to sneak in and swoop up a “Flo Jo” doll with only 40 seconds left on the “buy” ticker. (And 40 seconds is an eternity compared to how swift Flo Jo was on her feet: http://www.youtube.com/watch?v=c6KopglZzEE)

Yes, we all have our strengths and our weaknesses. And buying sports hero dolls lets us have a memory of physical prowess that will sparkle and shine, like gold, forever. This year’s celebration is at the midway mark, and the track & field athletes are about to hit the blocks and make their marks. U.S. hopeful Lolo Jones has been racking up pre-Olympics press, and she certainly has the looks and appeal to be this year’s Flo Jo. If she does as well as her agent and manager suggest, we might be looking at world records and a new fashion/sports doll in the making! 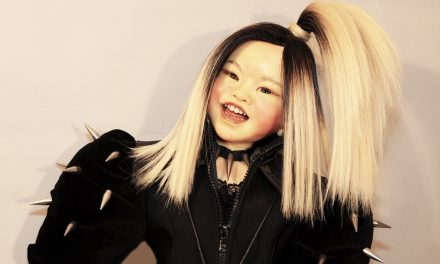 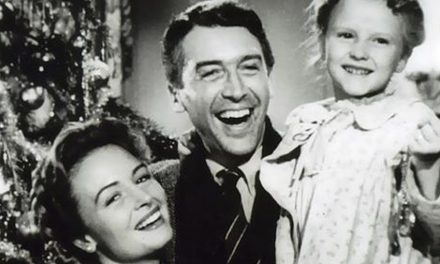 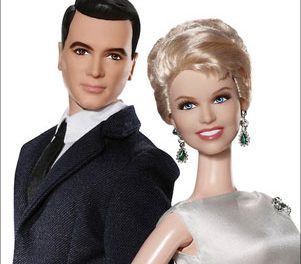