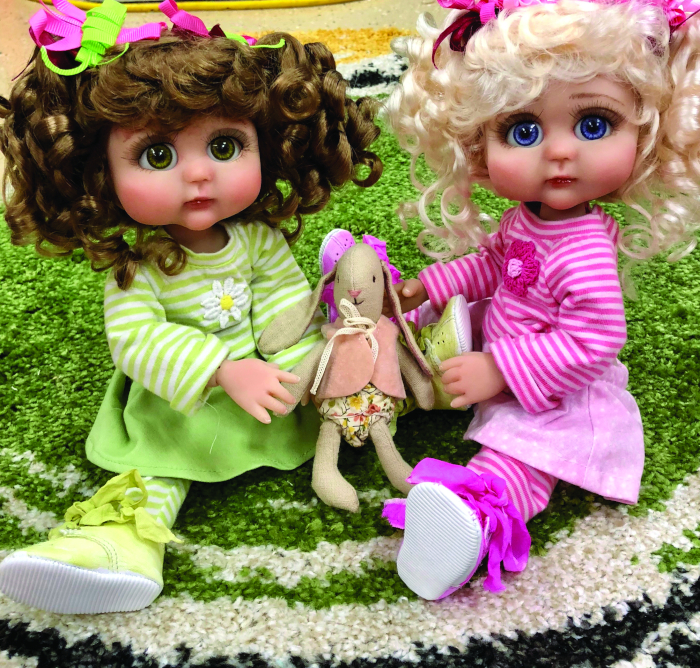 Award-winning ball-jointed doll (BJD) artist Judy Porter started her art career doing commissioned portraits, then launched a successful business as a caricature artist. “Who knew insulting people at parties would pay better?” she quipped. “I have worked professionally as an event caricature artist for well over 30 years.

“In 1997 another artist and I started The Fine Tooners, as event caricature artists who not only work but book other artists into events. We booked more caricature artists into events than companies ten times our size. Add to that, it’s a male-dominated profession — girl power! Plus, we get to go to all the best parties. You not only have to draw accurately and fast, you also have to keep up a conversation to relax your ‘victim’ and keep their attention. We are kind and gentle caricaturists, as we deal with a lot of children, high-schoolers, college students, and delicate egos. We never want anyone to walk away with hurt feelings — or beat us up in the parking lot!” 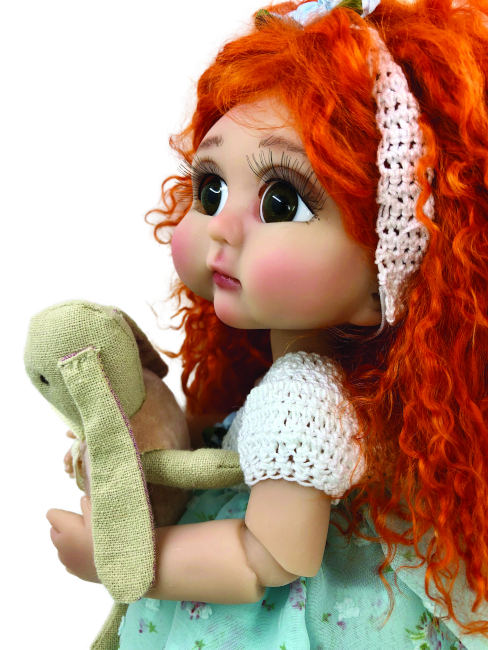 Addy Joy is a 12-inch resin toddler BJD; her looks vary dramatically with changes in hair, eyes, and clothing.

Nearly a decade ago, she tried her hand at sculpting, hoping to add caricature dolls do her repertoire. “Going from 2D to 3D was not the easy task I thought it would be,” she said. “I know sculptors who don’t draw and artists who can’t sculpt. It took me several years and some really awful work to pull something together.

“I studied with several sculptors, but my big break was having Pat Moulton mentor me. Not only is she so gifted, but she’s willing to share what she knows. I’m sure I made her crazy, but we have stayed close friends all these years. She helped me with my first award-winning BJD in 2012. When they called my name for an award, my sister and I showed no class whatsoever — we were over the top happy dancing! Pat was so calm. She just said, ‘I knew you could do it.’ I might add, too, that she wins awards about every year. Do I know how to pick a mentor or what?” 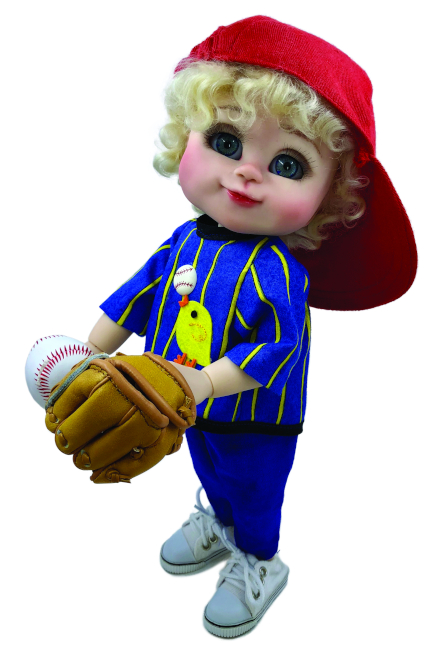 Porter’s 12-inch Maisie Mae toddler can be an impish little tomboy or a cute little boy. The doll has the same body as Addy Joy, so they can share clothes when Maisie feels more girlish or Addy Joy wants to play.

While caricature dolls might have been her initial goal, Porter is better known in the doll world for her whimsical BJD children. “My caricature work and doll sculpting have been very separate,” the artist said. “The first show I ever did, I tried drawing people with the doll they bought from me, but — you can’t really sell and draw at the same time. It might work if you were at a party at a convention, but not if you have a booth full of dolls to sell. I was drawing when I needed to sell and selling when I needed to draw. It got crazy! Never tried it again.

“However, I have done caricature art dolls for retirement events, wedding toppers, or some kind of a gag gift for an event. The subjects aren’t doll collectors, nor would they understand the difference in pricing on an art doll versus a resin BJD.”

The world of dolls

The key to finding success in the doll world, Porter said, is to hang in there. “Yes, there are those who hit it big with their first doll and every doll after, but I was not one of those artists. I was thrilled my first won an award, but it’s still an uphill battle to make joints better and design dolls that market well but keep your own style. It’s still a thrill to have a collector tell me they love my dolls. I am so grateful for those moments.

“I love making dolls, whether it’s sculpting for resin or an art doll. With an art doll, I can get more caricature, use fabrics and beaded armatures so the doll will still pose to a degree — it’s just art fun. I think the joy of art dolls must come out in my work as I have sold every one I have made, plus I have taught others online and on site. Teaching and sharing art is such a joy to me!

“My dolls always start with a drawing. I have to work out my ideas on paper. Sometimes I get wild with mixed media, and then the design becomes its own work or art. I admit to being an art-supply junkie. From there, often I will do little sculpts as studies which often become dollies for my resin BJDs. Or the design may make it to being cast as a BJD. 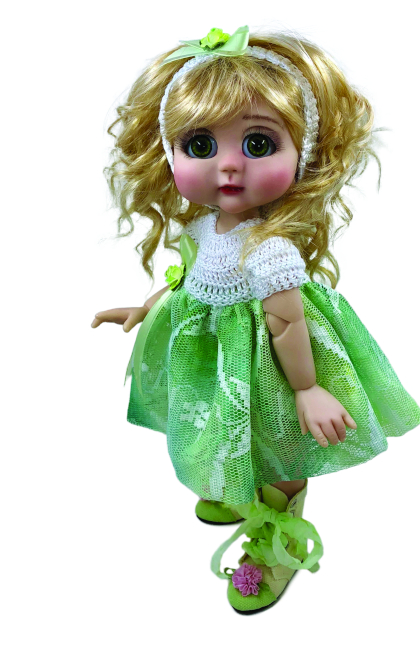 One of Porter’s new designs for 2019 is 12-inch toddler Addy Joy. “I had this doll drawn out, even started the sculpt,” Porter said. “We had just added our first great-grandbaby to the family. We hadn’t gotten to visit her yet, as they live in North Carolina. Here’s the interesting part — I go to the studio and asked my husband what he thought of the sculpt thus far. He said, kind of surprised, ‘It looks like our Addy Joy.’ So I show my daughter, who will always share the truth, no matter how painful, and she said, ‘It’s Addy.’”

So that is how this chubby little toddler came to be Addy Joy. Not saying there was some force at work here, as babies do tend to look like babies. But let me tell you, our Addy has some cheeks on her, as does this doll. She is growing out of that baby stage, so she very well may inspire my next doll!

“It goes without saying that, as artists, we put ourselves, our family, our experiences into our work. I have seen it with every artist. I am not intentionally trying to sculpt my daughter, but I have. I’ve been told some of my dolls look like me. I can promise you I never did that intentionally, but look around at other’s work — it happens. We have a style. I see it in my caricature artists. I could tell you who drew what even if they didn’t sign it.” 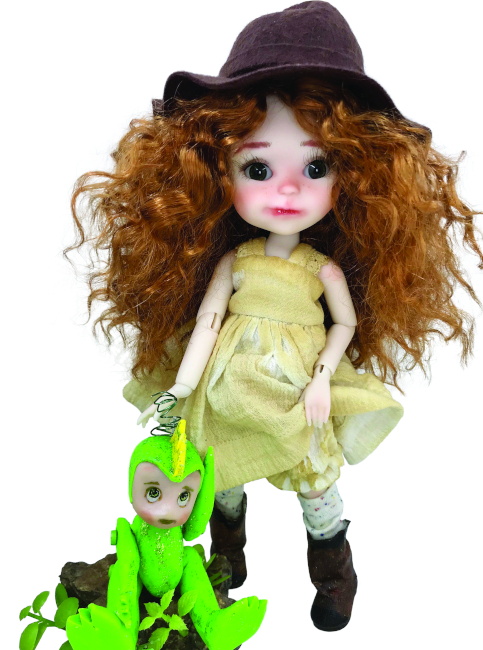 Porter created Cajun Wen, with her handmade pet gator Alli, for an MDCC event. Pat Moulton made Wen’s hat. “What makes it stranger is that her best friend is a southern belle named Jenny,” the artist said. “They can share clothes, as they are both 10-inch BJDs. But would Jenny really want a mud-covered swamp dress? The outfits are by Bonnie Larson, and boots and shoes by JP Dolls. It was a fun story for this limited edition.” 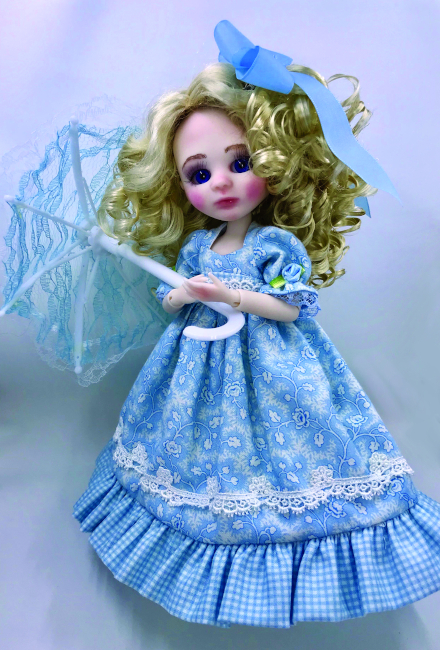 Coming up, Porter said she’s got some tiny dolls in the works, in response to doll collectors who’ve told her they’re running out of room. She’s also doing events at both the United Federation of Doll Clubs (UFDC) annual convention and the Modern Doll Collectors Convention (MDCC) this year. “Also, Addy Joy has a new best friend who can share clothes. The American Girl Welliewishers have clothes that fit my new toddlers — sorry not the shoes, but MSD fits perfectly. And so long as I have pen and paper, there are new dolls in the works. 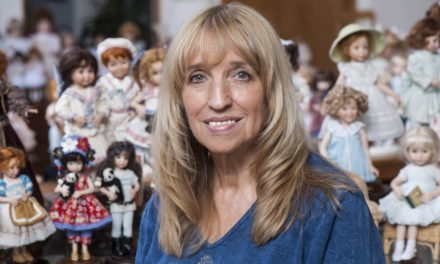 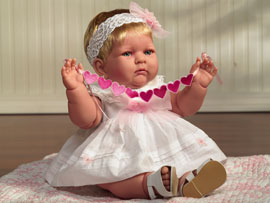