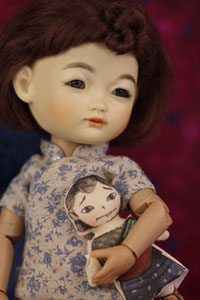 RubyRedGalleria is launching a new series of 8-inches dolls this year. The same size as the company’s StrawBerina and Four Kindergartners, these new dolls feature high-quality polyresin heads, unlike their previous 8-inch doll offerings.

The inspiration for RubyRedGalleria’s new line combines the modern-day search for a healthier diet with the ancient Chinese idea of the Five Crops, a grouping of important staple foods. The story of these new dolls takes us to a plain and ancient small village in a remote and inaccessible area of China.

Among the hundred or so inhabitants of the village are five innocent and lively children. Although the five are not all natives of this area, fate has somehow gathered them here, where they all attend the village school together and have become fast friends. Each of the five was born in a different area of China, and each is ready to share some special knowledge about promoting good health through diet.

Two of the children are sisters, two years apart in age, and strangely nicknamed the “Honey Twins.” Separated since the younger sister was born, now that they’ve been reunited, the two little girls stick together like glue — or honey, hence the nickname.

Hόng Hόng (left), the younger of the Honey Twins, was 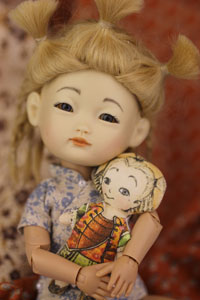 born in Yunnan, western China, and is nicknamed “Red Bean.” In Chinese tradition, red beans symbolize devotion and are often given to young lovers to ensure a long and happy marriage. For good health, Hόng Hόng suggests making China’s traditional sweet red bean soup: Boil the red beans for half an hour, then add sugar to taste. Besides being a daily therapeutic health drink, it also soothes the throat.

Mǐ Mǐ (right), the older sister, is nicknamed “Sweet Corn.” She was born in Heilongjiang, a Northeastern province, often called the “rice bowl” of China. Heilongjiang’s annual rich wheat harvest symbolizes wealth in China, as each grain of corn looks like a grain of gold. Mǐ Mǐ makes a cool drink to fight the heat and maintain good health by boiling some sweet corn together with wild red carrots, then adds sugar to taste. 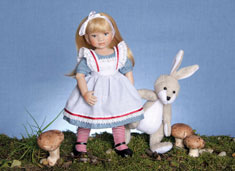 Berdine Creedy: Keepin’ it All in the Family…and in the Country

Ball-Jointed Dolls – What Supplies Do You Need to Get Started?