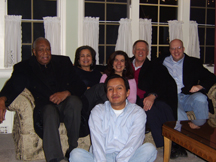 Toy Fair was great. Yes, the doll exhibitors said sales were down, there were fewer exhibitors than last year but over all, we had a great show. This was due in part to the opportunity to visit old friends, get great feedback from exhibitors and expand our knowledge of the market.

Ryan and I arrived at LaGuardia Airport in NYC early Saturday evening and were picked up by India Thybulle, DOLLS ad manager, and her partner Bernie in their car. Plans were to have dinner at former DOLLS editor Nayda Rondon’s house at 7:30 p.m. Nayda lives on the Jersey side and we planned to arrive at 7 p.m., in time for a short visit before dinner was served.

Although it didn’t seem too complicated, we somehow were unable to follow the Mapquest instructions and ended up within blocks of Nayda’s house, driving back and forth, searching for a key street name we never found. We had the added bonus of become familiar with the neighborhood as we passed the same recognizable landmarks, time and time again.

Finely, we stopped a local squad car and asked directions. His response was to lead us to Nayda’s house with lights flashing. Had he included the siren, I’m sure Nayda and her family would have assumed the worst.

As it was, we arrived at 7:30 p.m., just in time for a great dinner and fabulous company. See the photo of the group.

If you plan to attend Toy Fair next year, we’d love to see you. We’re easy to find. Just look for the police escort.

The Affects of Pop Culture on Doll Collecting