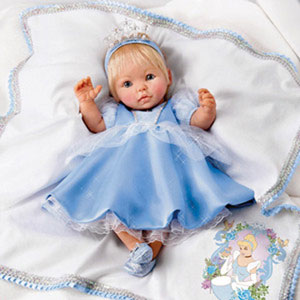 Once upon a time . . . a little baby named Ella was born. Here the future princess is conceived by Ashton-Drake Galleries. 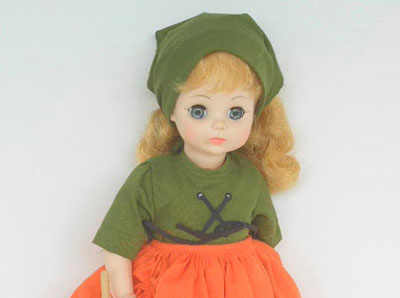 Poor Ella was forced to sit by the fireplace, clean up the ashes, and sweep up the cinders. Madame Alexander fashioned this version in 1965. 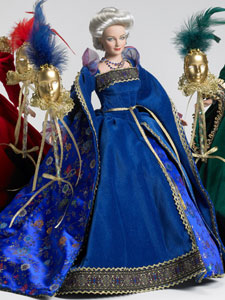 The Wicked Stepmother might not be facially hideous, but she is arrogant and evil. Robert Tonner created this very naughty lady. 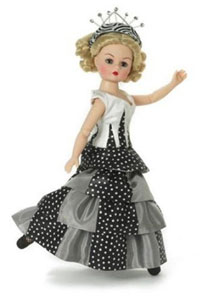 Cinderella was forced to bear the ridicule of her two stepsisters. Her older stepsister was made by Alexander Doll Company in the costuming of the American Ballet Theater’s landmark production. 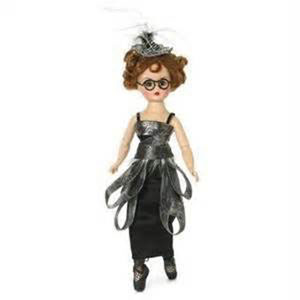 The ABT set Cinderella’s tale in the Roaring Twenties—here her younger stepsister shows off her flapper style. 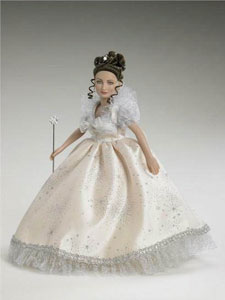 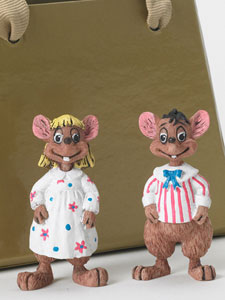 A pumpkin is turned into a breathtaking coach, and mice (provided by Tonner) into footmen . . . 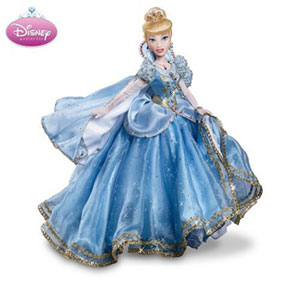 and the transformation into a mysterious girl who will attend the Royal Ball is complete. “Impossible” things do happen. Imagined by Ashton-Drake . . . 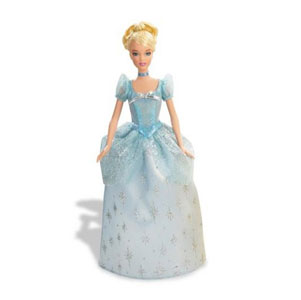 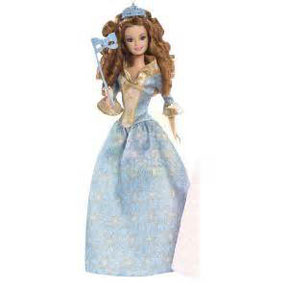 By Barbie as Carnival Cinderella . . . 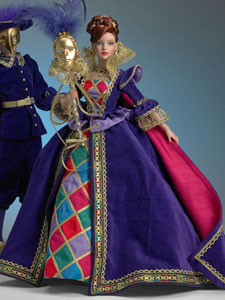 By Tonner’s Cinderella in Masquerade . . . 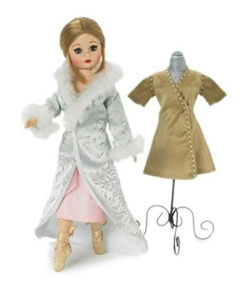 And finally by Madame Alexander and their American Ballet line. 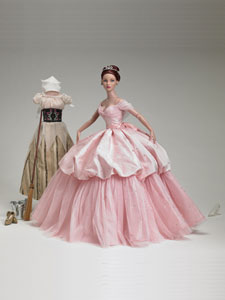 Tonna Cinderella Doll, garbed in her gorgeous gown forever and ever, leaves her rags behind, according to Mr. Tonner. 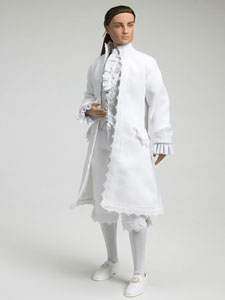 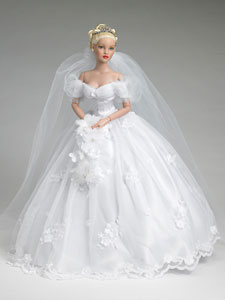 Once upon a time—well, actually, it wasn’t so very long ago—just about a week past, I was treated to one of the nicest days out in many, many eons. For Mother’s Day and for my daughter’s First Communion, my very good friend, Cathy, took us to Broadway to see “Cinderella.” Featuring all of the lush Rodgers and Hammerstein score, with a few not very notable new additions, the musical is more than enjoyable. It’s positively enchanting.

My friends Betty and Frank, who are very jaded theatergoers, told me that it is a “perfect production,” and I think they are right. All of the cast—from princes to peasants, fairies to foxes—are first-rate and so entertaining. I’m sure this staging will be given a road company soon and a national tour. Plus, with the exposure it is bound to get at the Tony Awards (Sunday, June 9, CBS), people all across the world will get a chance to experience the thrills and splendor. I can’t recommend it highly enough! Go if the opportunity affords itself.

Now, as I was watching the musical, I remembered the TV versions that have defined each viewing generation. The original black-and-white special showcased the superlative soprano of a young Julie Andrews. The second interpretation—in living color—introduced America to Lesley Ann Warren. The most recent television spectacle featured Brandy as Cinderella and the late Whitney Houston as the Fairy Godmother in an inspirational multicultural presentation.

What’s fascinating about these three small-screen versions, and the Broadway presentation as well—is that there is nary a flaxen-haired Cinderella amongst them. None of these ingénues, including the new Broadway starlet (Laura Osnes), has golden tresses. So, why, then, do we all envision the most famous rags-to-riches heroine as a blonde?

Obviously, the Walt Disney cartoon has had a far-reaching impact since its 1950 release. For more than 60 years, that animated fairy-tale rendering has colored our collective notion of what Cinderella should look like.

It’s interesting to see how doll artists have responded to the Cinderella follicle challenge. Many have approximated the Disney-fied version of the classic heroine, giving her butter-yellow hair and a sky blue gown. Others have gone off and added their own touches of whimsy and glamour.

The fable of Cinderella’s heartfelt desire for one special, lovely night, and her eventual reward of gaining a prince and a kingdom, holds an allure for everyone. Because she’s shown to be so earnest, so humble, and so nice, her wish for a better, splendid existence doesn’t come across as materialistic or spoiled. In fact, due to the mistreatment she’s had to endure from her wicked stepfamily, one could argue Cinderella was owed that tiara and throne!

In the new telling of the tale, the book has been altered to blend a little social commentary with wry, gentle feminism. Unlike the proverbial glass slipper, this is the perfect fit for any theatergoer who wants to surrender to magic and joy.

And, if you want to hum some “Cinderella” music—the Disney or Rodgers & Hammerstein version—here is a divine array of different Cinderella, Wicked Stepmother, Fairy Godmother, silly Stepsisters, and charming Princes to drool over. (Plus, a little YouTube magic to help you along, http://www.youtube.com/watch?v=GSWK01a5gAE)

Collectors, everywhere, enjoy this Happily Ever After musical interlude … and this photo gallery of Cinderella dolls from DOLLS magazine.