Ruth Handler, the creator of Barbie, passed away on April 27, 2002, at Century City Hospital in Los Angeles at the age of 85. From that fateful moment in 1959 when Ruth unveiled a curvaceous, adult doll to a conservative public who didn’t quite know what to make of the “toy,” this enterprising woman had guaranteed herself a spot in the annals of popular culture. It is hard today to understand just how unsettling Barbie must have seemed to mothers and fathers of the time. This is back before adult collectors embraced Barbie as their own mascot; this was in the days when dolls were for little girls, and little girls were destined for babies and domesticity. Ruth Handler changed all that.

Born post World War I, Ruth was the last of ten children, a seemingly devoted daughter of Polish immigrants, who spoke only Yiddish around the house. Ruth Mosko was, however, a rebel. Growing up in Denver during these Great Depression days, she was not content to stay at home and marry the boy next door. Instead, she became infatuated with Hollywood. Beckoned by the allure of orange groves and starlets sunning by swimming pools, she moved to Tinseltown, alone, in 1937. She was only 19. From her earliest days, Ruth had exhibited an unbridled quirkiness. In her autobiography, she writes: “I am a fiercely independent woman, one who has always felt the need to prove myself, even as a child.”

Ruth got a job as a stenographer at Paramount Pictures, and was certainly living her own liberated version of the American dream. Shortly thereafter, Elliot Handler, a beau from her teen­age years, followed her to California. A trained artist, Elliot married Ruth, and together, they would start a business, raise a family and shake up the national consciousness.

The co-founders of Mattel, Ruth and Elliot guided their company through lean and lush years. They shepherded their firm from a giftware business to an international toy giant. During each of these incarnations, the Handlers were buoyed by Elliot’s creative touch and Ruth’s unstoppable gumption.

While presiding in the boardroom, Ruth simultaneously raised her two children, Barbara and Ken. It was in the family living room that she made her most heralded connection. “I’d listen, fascinated, to the girls as they played with their paper dolls, hour after hour. And I discovered something very im­portant,” Ruth wrote in her autobiography. “They were using these dolls to project their dreams of their own fut­ures as adult women.” Ruth set out to make their playful prognostications more permanent. Rather than having imaginary futures crumpled and consigned to the trash heap, Ruth decided a solid, three-dimensional doll had to be manufactured, a doll that was sturdy enough to withstand dressing and dreaming. Barbie was born.

Basing her idea on a gentleman’s toy that she had spotted during a European ski trip, Ruth had a gut instinct that a refined version of the German “Lilli” doll could be a hit. Never afraid to wade into the unknown, Ruth had an American counterpart designed for the 1959 Toy Fair. The Barbie doll–named for her daughter, Barbara–was appropriately garbed in a black-and-white bathing suit, for this new invention was about to sink or swim. Thankfully for doll collectors everywhere, Barbie did more than swim–she crossed the channel separating little girls from their inner fantasies and, in the process, helped to pull a generation along behind her. Via Barbie, little girls could pretend to be mothers–yes–but they could also envision themselves as doctors, lawyers, politicians, astronauts, pilots and whatever else their aspirations could dream up. The same year that she made such a splash in a swimsuit, her Commuter Set outfit was released. Barbie was already telling the world loud and clear that she was much more than a beach bunny; she was a woman who was ready for anything and prepared to go anywhere.

“Ruth was vice president of Mattel Toys when I became Barbie’s designer in the 1960s,” recalls Carol Spencer, the talent behind many of Barbie’s most ele­gant costumes. “Her plan that Barbie be thought of as a real person rather than as a toy or doll made a tremendous impact on children everywhere.”

One such affected person was doll artist Robert Tonner. “We all owe a debt to Ruth Handler,” he has stated. “Without Barbie, you couldn’t have Gene or Tyler Wentworth or any fashion doll down the road. She made people see dolls in a new way. And she made it acceptable for adults to want to have dolls again in their lives.”

Ruth Handler’s life was filled with turbulence and triumph, ups and downs, reversals of fortune and unpredictable comebacks. Leaving Mattel in the late 1970s amid speculations of financial irregularities, Ruth had already accomplished more than most women of her generation. When stricken with breast cancer, she bravely channeled her never-say-die attitude into forming a company, Ruthton Corp., that produced natural-looking and natural-feeling prosthetic breasts. The woman who had been chastised for making Barbie too buxom was now helping all women to feel more comfortable in their own skins.

There’s a tidbit about Barbie that gets pulled out of the Ripley’s vault every now and again: If you were to place head-to-toe every Barbie that has been produced in over 140 countries since day one, the dolls would form a chain that would circle the earth more than 11 times. Collectors and children everywhere know that it only takes one Barbie doll to wrap itself around your heart and inspire you to reach for the stars. Ruth Handler gave doll lovers the world over the freedom to dare. 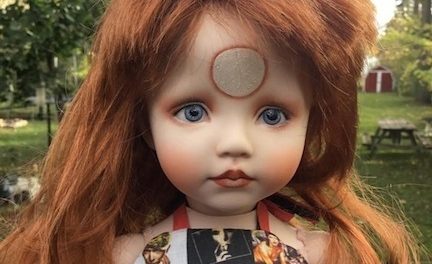