I asked Barbie® enthusiast, Romona Jennings to share images, her thoughts, and overall opinion of her most recent acquisition, Ayako JonesTM Barbie® by Byron Lars, and she did!

“The above photo represents the heavy influence of ethnic culture that Mr. Lars incorporated into his vision for Ayako JonesTM, the first doll in the Byron Lars Barbie® “Passport Collection.”  The term “passport” leads me to believe that there may be more high-end Black dolls in this line.

“An online dictionary defines Ayako as “beautiful child.”  This Ayako is a jetsetter who is smitten with Japanese culture.  The doll’s outfit is sewn on; therefore, for redressing, a collector will have to carefully undo the seams.  The pinstriped pants are not separate from the beautiful jacket.  The jacket’s painted-on design is absent on the sleeve where the arm is bent.   The doll’s limbs do not bend because she has a Model MuseTM (MM) body; a body sculpt designed by Robert Best.  This is the only downside – not being able to pose Ayako.  The MM body is a slimmer sculpt with small breasts and longer legs like runway models.  Many faithful Barbie® collectors are not fond of the MM body because they feel it is not a realistic image – even though the Twist ‘N TurnTM body isn’t either.  The other dolls pictured above with Ayako are Princess of South Africa Barbie® and Barbie® Styled by Yuming.”

“I view Ayako JonesTM as a continuation of Mattel’s evolution.  I am old enough to remember generic manufacture and retail of Black dolls when realistic skin tones, facial features, and “personality” were absent.  Companies mass produced Black dolls for profit and not necessarily creativity.  What I like about the Lars dolls is their different skin tones and hair (colors and texture).  I love the rooted eyelashes.   By the way, Ayako’s ears are not pierced.”

“When I first saw the Lars’ “Treasures of Africa” line, I was thunderstruck.  I had NEVER seen such beautiful Black dolls… that is until the “Chapeaux Collection” was introduced.  That’s when I became addicted to Sugar!  In this photograph, Sugar is sizing up the new competition.  (The male dolls in the above image are an African American Ken® and Integrity’s Darius Reid.)”

“Ayako’s haute couture outfit can be matched up with a lot of colors to create a nice diorama.  I have owned these miniature sages for 15 years and was pleased to use them with the Ayako theme.”

“The back of Ayako’s box contains a postcard from Ayako and a map with a pink crystal dot designating the island country of Japan.  Ayako’s postcard salutation, “Hey Girl” and her “handwritten” note indicates she is down-to-earth, fun loving, but strictly business oriented in the corporate world.”

To sum it up, Romona loves Ayako JonesTM.  She believes Mattel and fellow Barbie® enthusiasts are fortunate that Mr. Lars has incorporated his exquisite doll designs into the Barbie® line. 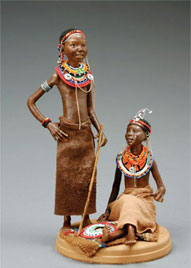