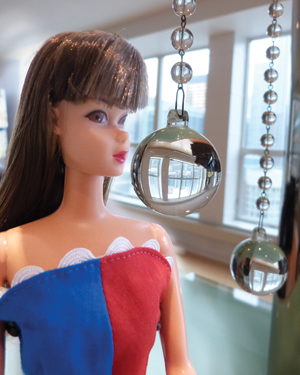 Of the more than 80 dolls in her collection, Carol Roth’s favorite is this brunette TNT doll with brown eyes, wearing a dress inspired by the vintage Barbie fashion called “Fancy Free.” 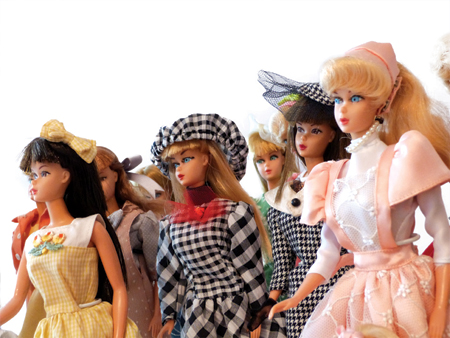 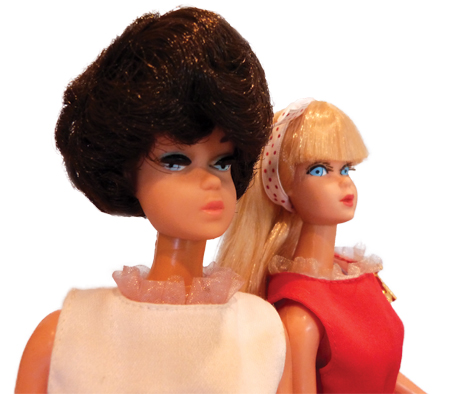 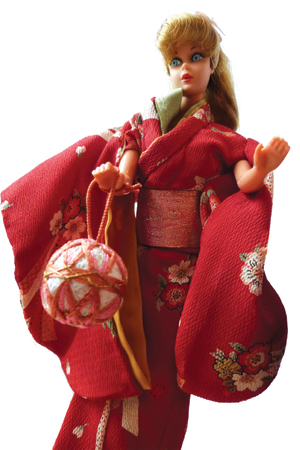 With the P.B. Store located in Japan, it is not surprising that one of the most popular types of fashions were kimono fashions. The store featured a wide variety of kimono fashions, with different prints and fabrics. 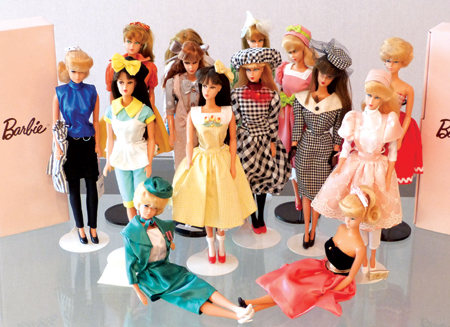 The P.B. Store Barbie dolls came in a variety of fashions and accessories. Many were based on or inspired by vintage Barbie fashions. Others reflected 1980s fashions. 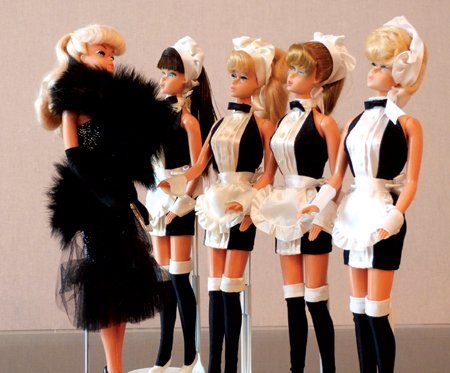 When you ordered a doll from the P.B. Store, you could choose different features, including the head mold, eye color, hair color and style, so even if you find two dolls in the same fashion, they are often different. Here are four different versions of a doll in a French maid ensemble, with a dress that is a shorter version of the Barbie “Solo in the Spotlight” fashion. 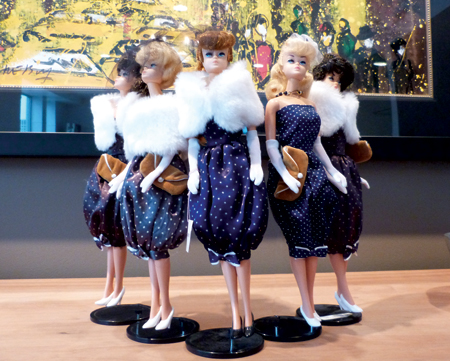 Every outfit made by the P.B. Store was produced in a run of 40 or less. Because they are all handmade, often the same outfit was made in different fabrics. This is a group of P.B. Barbie dolls wearing the different variations of an outfit based on the vintage “Gay Parisienne” fashion. Some are made of cotton, some are made of satin, and some have smaller dots in both shades of blue and a steely green.

P.B. Barbies whirled onto the Japanese doll-collecting scene for a short time, leaving a finite number of rare and valuable pieces still sought after by collectors today.

Carol Roth — business guru, author, CNBC contributor, WGN radio host and W Club mastermind of Integrity Toys, among her many other accomplishments, is a woman of many talents. During the first half of the last decade, she attacked doll collecting with the driven tenacity and perfectionism that is the hallmark of her every endeavor. Originally drawn to doll collecting when she rediscovered the Glamour Gals, Roth was lured by the buying and selling game inherent in collecting.

Roth first became aware of P.B. Barbies when she read the article “Barbie P.B. Store” by Miyoko Mizuhara, which appeared in the Sept./Oct. 1995 edition of “Barbie Bazaar.” In the article, Mizuhara quoted Mr. Komiya, a Bandai employee whose brainchild was the P.B. Barbie line, from an interview that ran in the April 1987 issue of “Fujinkoron,” a Japanese women’s magazine that was popular at the time: “I wanted to create dolls that were as well-made as the early Barbie dolls and sell them in a specialty store,” he said. “The Barbie dolls in the 1960s were great. About 100 million Barbie dolls were made in Japan in the 1960s. The dolls and outfits were well made and of the highest quality.” In the interview, he further explained, “I was very particular with the quality. Eyes, eye shadows, and lips were hand-painted. The eyebrows and eyelashes had to be machine printed, and we had to be very accurate. Just a 0.5mm miss would affect the doll’s beauty.”

Introduced in 1986 at the P.B. Store in Tokyo, the P.B. Barbie doll line quickly proved unsustainable, and the store closed its doors in Feb. 1988. Although short-lived, the Mattel-Bandai partnership left a limited number of highly sought-after and valuable collectibles in its wake. The dolls’ extinction was due not to lack of popularity, Roth hypothesized, but because the dolls were available for custom order. “My guess is they were probably too labor-intensive to do each one individually. It’s like with any business — sometimes your weakness is what keeps you from succeeding. It draws people to you, but it keeps you from being able to scale it,” she said. “I know from working with Integrity Toys how hard it is to produce an edition of 500 dolls that are all the same. Now we’re talking about custom head molds and custom colors.”

The custom nature of the dolls — two head options, endless material and color combinations to pick from, and alternate hairstyles and eye colors — as well as the facts that most of the fashions were created in extremely limited runs of 40 and that the dolls came from Japan captured Roth’s attention. “I had a particular affinity for items from Japan, because they tended to be more interesting and quirky,” she said. Within five years, she proceeded to acquire what she believes in the largest collection in the United States today.

Roth connected with collectors mentioned in articles and on eBay to grow her collection. “One of the insane things I used to do was go on Yahoo Japan, and I would have a bidding service bid for me,” she said. “I did that way before anyone figured out that was something you could do. When I do something, I want to do it better than everyone, have everything.”

Although intense while it lasted, Roth’s attention turned away from collecting in the mid-2000s, and she hasn’t looked back. “The sad thing is I don’t collect anymore,” she said. “I hate the fact that these are sitting in boxes. I would love the chance to find people who want to give them a new home.”

When asked about her favorite piece in the collection, Roth pulled a simple but striking doll dressed in a blue and red dress from her collection laid out neatly on a bed for Haute Doll to photograph. “I like the TNT face of this one,” she said. “The colors are just so pretty and vibrant. If I were going to hold on to one, this would be the one. They all have such different personalities, which is part of what I liked about them — that each one is really different. It kind of makes it hard to pick one.”

Although Roth’s collecting kick has long since subsided (except for outerwear, shoes, and handbags, she confessed), her appreciation for the rare P.B. Barbie dolls has not. “I just think it’s a really unique representation of a period in time. I really couldn’t imagine it being done again because of the way the world has shifted. Even though personalization has come back into play, it’s just so difficult to get things made these days. I think it would be pretty challenging, but they are extremely, extremely cool.”