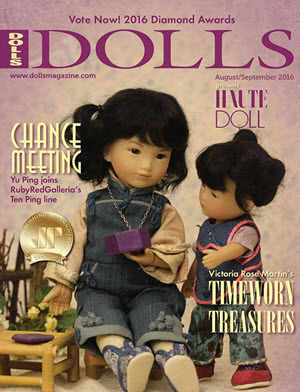 The August/September 2016 issue of DOLLS features 68 four-color pages. This special crossover issue with Haute Doll features a RubyRedGalleria cover exclusive to DOLLS. Inside, there’s coverage of the newest character in the Ten Ping line, artist dolls by Victoria Rose Martin, the new body sculpt from Integrity Toys, the first of BiDoll’s new Lithe dolls, a special paper doll designed by none other than Robert Tonner, Joe MacPhale’s Marilyn Monroe automaton, and the nominees and ballot for this year’s Dolls Awards of Excellence Public’s Choice competition! Plus, we have our usual columns on antique and vintage dolls, summer show coverage, and more.

18 From Dolls to Divas
Maureen Vorswijk, owner and designer of Mauke V Jewelry,
has a new passion in her life: fashion-doll enthusiast.
By Stephanie Finnegan

28 Timeworm Treasures
A a child Victoria Rose Martin, now 47, could look out her bedroom window and see historic Boldt Castle in the distance. “Seeing that castle every day was a tremendous inspiration to me,” Martin said. “I even sculpted it out of a primitive flour-and-water-mixture.”
By Linda White-Francis

50 Made to Move Marilyn
Breathing new life into a timeless sex symbol is definitley not for the faint of heart. But that didn’t stop artist Joe MacPhale from challenging himself to create an electronic, doll-scale version of Marilyn Monroe.
By Wil Peterson 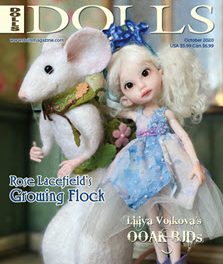 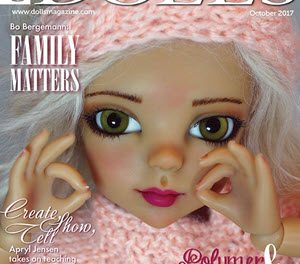 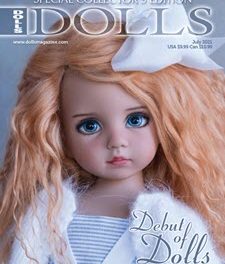 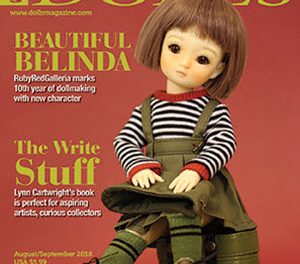