Star Turn: Angela Cartwright has excelled as an actress, an artist, and a doll 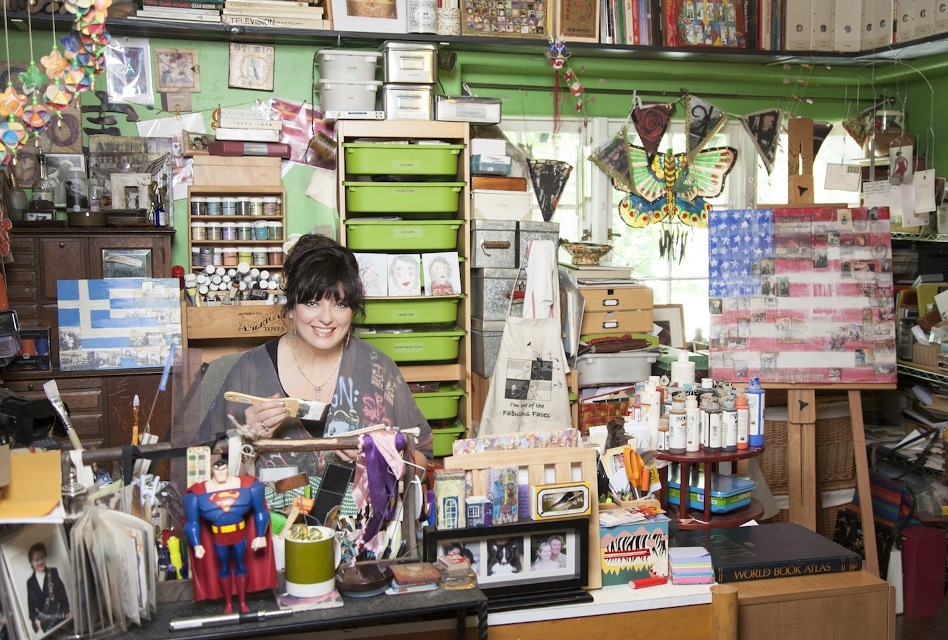 Angela Cartwright in her art studio. Photo by Jonas Mohr

As summer has advanced upon me — I’d say it snowballed its way onto my radar screen, but that is a meteorologically mistaken metaphor — I have to figure out things to occupy a tween and a teen for long, hazy days without school. One way to provide a few fleeting hours of family bonding is to watch a DVD of a long-ago classic TV series or to unearth a compendium of forgotten film favorites. Luckily, I’ve received a lot of boxed sets over the years, and as an unapologetic pack rat (Sinatra and Martin and Davis were the Rat Pack; I’m like them, but reversed), I can always dig out something to entertain the gang. 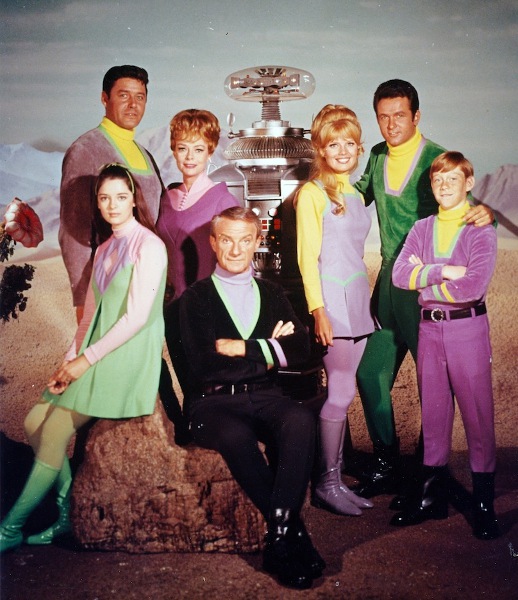 The “Lost in Space” cast.

Our upcoming viewing will be the camp-classic sci-fi show “Lost in Space.” Now, what makes this choice interesting to me (and I hope to you readers) is that one of the stars, Angela Cartwright, is a self-admitted pack rat, too. She’s a collector who acknowledges that some of her possessions border on hoarding, but she’s never let a spatial problem stop her from acquiring an item that tugged at her heart. (It’s ironic, isn’t it, that a “Lost in Space” star would grouse about losing space in her home and in her studio.) 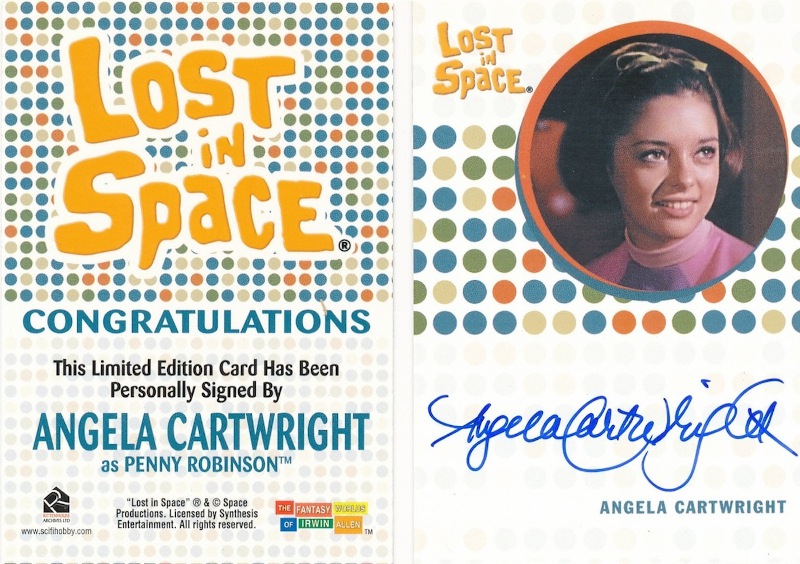 Cartwright has kept many of her collectible items, including the “Lost in Space” trading cards.

I’ve had the great good fortune to interview Cartwright a couple times, and she’s an engaging personality. She also has the unique position of being a triple threat: Angela is a collector; she’s an artist who makes collectibles; and as a child, she has been made into a collector’s item herself. That’s definitely a fascinating take on the world of collectability. 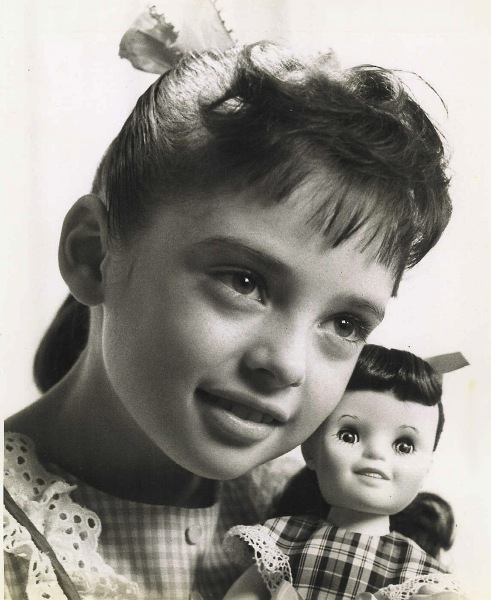 Young Angela and one of her doll likenesses.

“I have my old scripts from the ‘Danny Thomas Show’ and some of my Linda Williams character dresses that were designed for me and I wore on the show. I also have lots of ‘Lost in Space’ scripts, trading cards, memorabilia, and so much else. But the majority of what I have are photographs,” she told me. “I have tons of photographs. I have them from my early days through my appearance in ‘The Sound of Music’ and ‘Lost in Space.’ My dad loved photography, and both my parents kept many of these clippings and photos from my childhood.” 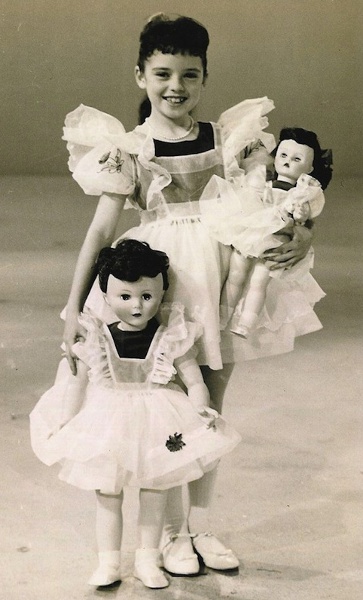 Angela, with two dolls of her Linda Williams character.

Beyond having Polaroid images and scrapbooks of her youth, Cartwright also has mementoes that trump Kodak snapshots. She has dolls that reflect the many characters she embodied. Among her most famous roles are Linda from “Make Room for Daddy” (aka “Danny Thomas Show”), Penny Robinson (“Lost in Space”), and Brigitta von Trapp (“The Sound of Music”). The precocious on-screen stepdaughter of fictional TV dad, Danny Williams, Linda was a vision of cuteness and mischievousness. Her sitcom relationship was that of an adorable little girl who could hold her own with a song and a wisecrack against nightclub legend Danny Thomas. Her character of Linda was able to belt out a ditty or trade a barb with her television father. Linda Williams was so popular that she was made into all sizes and styles of dolls. 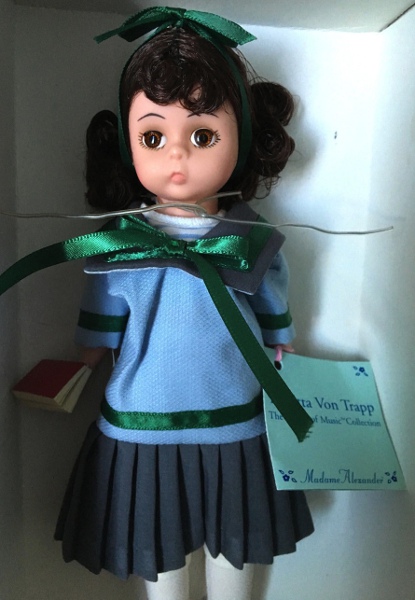 The Madame Alexander version of the Brigitta character.

In “The Sound of Music,” Cartwright played Brigitta, who was a bookworm that bloomed under the tutelage of governess Maria, played by Julie Andrews. “I am so proud to have played her, and to have breathed life into that character,” Cartwright shared. “It’s almost unbelievable to me that ‘The Sound of Music’ turned 50 years old in 2015. It’s a movie that will persevere as a classic; it will never lose its charm and its beauty. Families 50 years from now will be moved and affected by that film.” 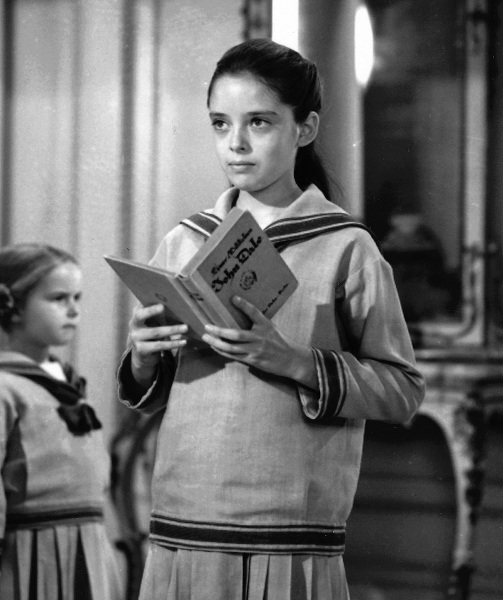 Cartwright was definitely impacted by that role. The bond that she developed with her cinematic siblings has endured over the years, and they have all remained in touch as they grew up and raised children of their own. (Cartwright and the other cast members were all deeply moved by the recent death of their oldest film sister, Charmian Carr, who played 16-year-old Liesl. I blogged about that loss in an earlier Doll Chronicles.) 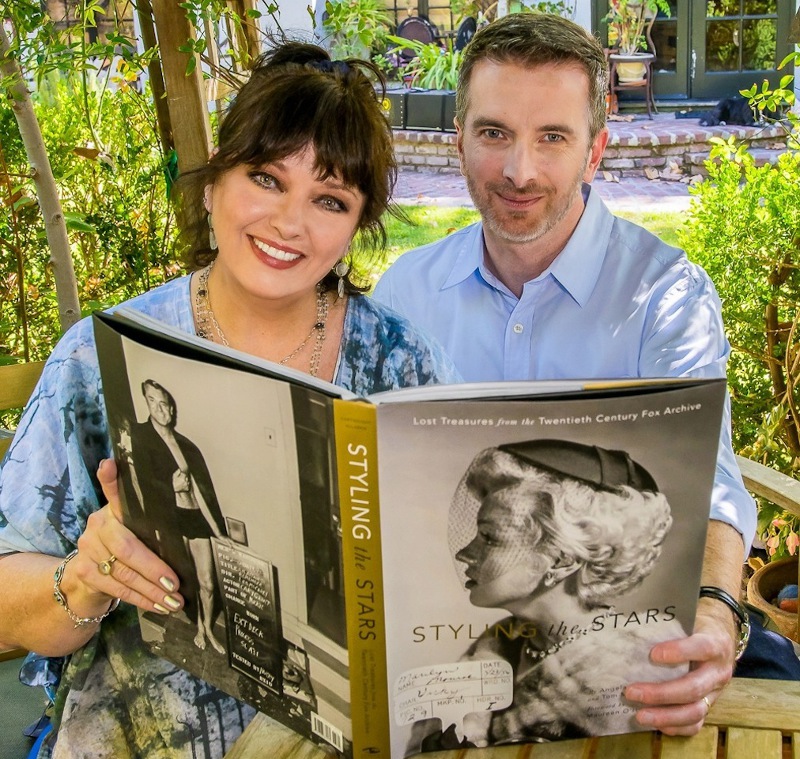 The connection of the actors who portrayed the real-life von Trapp brood has been chronicled in various articles, documentaries, and their own book of published memories. THE SOUND OF MUSIC FAMILY SCRAPBOOK featured behind-the-scenes recollections, personal photos, and shared experiences. Besides her involvement with this book, written by Fred Bronson, Cartwright has authored her own books that showcase her artistic abilities. A well-respected artist, Cartwright has had her works shown in galleries around the world and has had her images re-created on women’s fashions and accessories. Her keen eye for color, shapes, and motifs has made her artwork the perfect complement for high-end, luxury clothing and scarves. 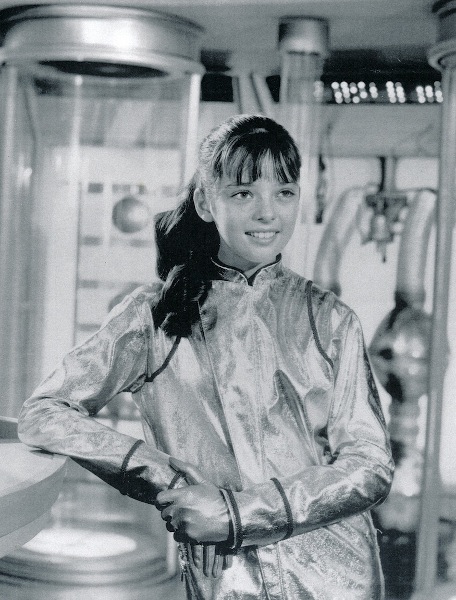 Angela as Penny Robinson. She feels this is one of her enduring iconic roles.

Additionally, Cartwright has dug into the archives of 20th Century Fox, being allowed unfettered access to press and promotional materials, and co-wrote an in-depth celebration of how stars were literally and figuratively groomed for success. “Styling the Stars,” co-authored with Tom McLaren, is a valentine to the hard work and demanding, exacting consistency that has gone into making a movie star seem timeless, impetuous, and guileless. 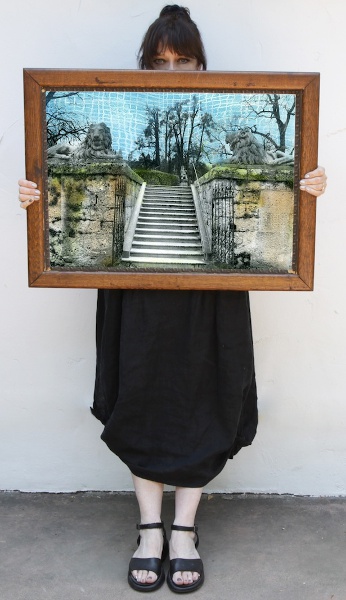 “I never had a clue when I was a young actress if a show was going to be an enormous hit or not. I don’t think you ever know how a show or a character will be received, or whether a show will become a classic or a flop. But that’s a part of show business,” she opined. 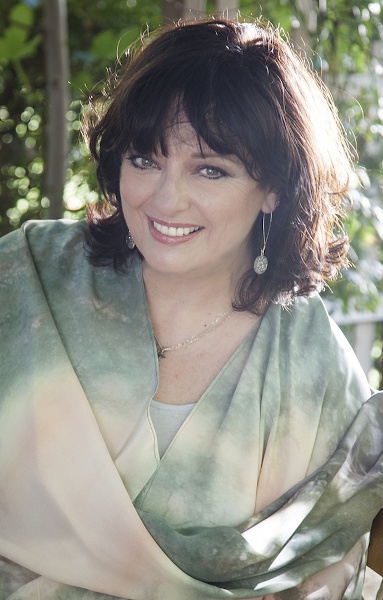 Cartwright in one of her Artwear garments. Photo by Jonas Mohr

Having left behind the confines of Hollywood, Cartwright has found her ideal niche as a film historian, artist, fashion designer, wife and mother, and concerned citizen. She rejoices in living a life where her art can reign supreme.

“I do treat my art as a career but also as a passion. I feel art when I’m arranging flowers, making dinner, or painting a piece of furniture. My art ebbs and flows. Sometimes I can’t keep up with all the ideas I have percolating … I make sure to write everything down so I don’t forget,” she affirmed. 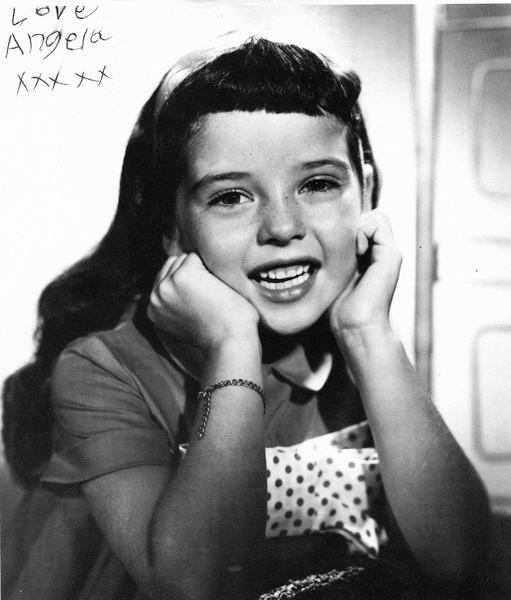 One of Angela Cartwright’s earliest headshots.

“The business side of art is work … the artful side is expression and joyful. It is difficult at times to balance the two. I could hole myself up in my art studio all day, everyday, so I constantly remind myself to get outside and smell the roses,” Cartwright stresses. “Making art is instinctively motivated. When I think too much, I never like what I create. When I am motivated by freedom, I am happier with the result. But that does not mean others will like your work. And you need to decide when you make art, who are you making it for … others or yourself. I think artists get disgruntled when they only make art for others and what they feel their audience wants. It does not allow an artist to grow. We need time to experiment; we need time to express ourselves. At least I feel I do.” 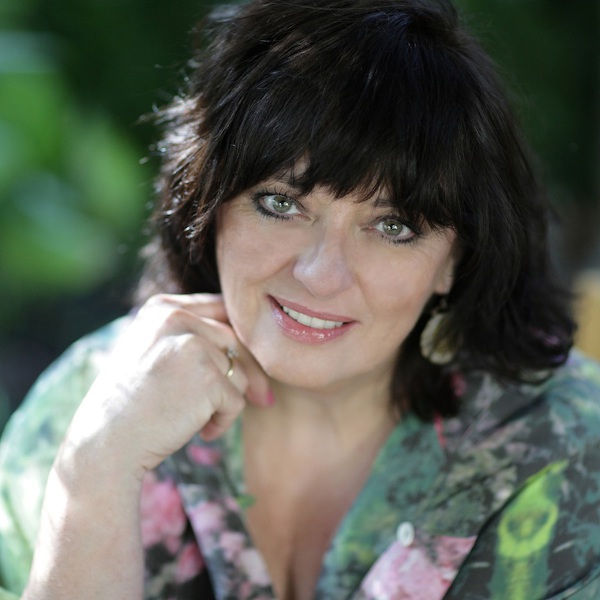 When questioned if her childhood and teenage stardom might be the impetus for collectors to check out her artwork and hand-painted altered photography, Angela Cartwright considered it and then remarked: “I don’t know what came first the actor or the artist … whichever way it works, I am always grateful.”