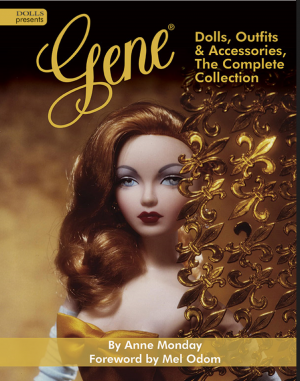 In 1995 Gene Marshall burst into the doll collecting world. She stood a glamorous 15 ½ inches tall at a time dominated by the 11 ½ inch Barbie. Created by artist Mel Odom, Gene was presented as a doll for the adult collector, to be redressed and played with by her owners. Gene was so successful that within five years many manufacturers copied her size, launching the era of the 16-inch fashion doll.

Gene is a Hollywood star whose career ran from the 1940s until her retirement in 1961. As such, her wardrobe is replete with outfits from such highly recognized designers as Dior, Charles James, and Valentino as well as costumes from her movie roles, both contemporary and historic, complete with coordinated hats, shoes, gloves, purses, jewelry, and more.

Save this product for later
Display prices in: USD