One of my current guilty pleasures (truth be told, I have more of these than I can count) is that I really adore the Fox TV show “The Masked Singer.” When I watch this show, with its outrageous costuming and over-the-top accessorizing, I am in seventh heaven. To me, it is like watching an array of fashion dolls spring to life. The costuming runs the gamut from beautifully haute couture to opulently dramatic. The wardrobe is worth a look for all doll enthusiasts. Coming across a folder of April Norton dolls, I smiled and thought, “Ah, these characters could be on that show!”

For 2019, Norton went all out with her pageantry and eye-catching costumes. Known as her Amethyst Series, these creations embody the spirit of performing, theatricality, and unabashed happiness. “The theme of these dolls are fantasy, dance, and carnival,” Norton told Doll Chronicles. “It is all worked in the shades of grays and purples. It has been in my mind for quite a while. Right now, I am bringing it to fruition.” These April Norton dolls are the fourth set of her white-porcelain creations. “I like to do some every year,” she stated. “I know that many of my collectors look forward to them.”

The contestants on “The Masked Singer” rely upon the votes of the studio audience to progress on the show. April Norton, likewise, listens to her fans. She is very responsive to her customers and has a true respect for their opinions. “I want to be approachable to the people that collect my work,” she emphasized.

“For example, if it is a repaint, I will go through different steps of the process. I will talk it over with them and send them pictures. They can give me input into how the doll will end up looking. The collector might decide she wants the eyebrows closer to the corners of the eyes. I will listen and will accommodate. Or, perhaps, the collector might say that she prefers the eyes to be a bit bluer or wider. I am happy to meet their requests and develop a closer relationship,” Norton stressed.

Empathy and availability are two of the reasons behind April Norton dolls’ success. As a collector, and an artist who enjoys Facebooking with clients, Norton knows what makes a doll collector tick. “I have the best customers,” she bragged. “They tell me how pleased they are when they receive their dolls. I have to admit, I never grow tired of hearing this. It is an amazing feeling to know that your work has pleased someone and has brought them happiness.”

April Norton dolls do that for their owners and even for the rubberneckers who just see them in the pages of magazines or online. Norton counts herself among the people who are passionate followers of DOLLS magazine and its website. “I rarely read any other magazine,” she admitted. “It is a big influence on me.”

By browsing through the pages, Norton can see what collectors are clamoring for and responding to. “I love seeing what other artists are doing, and figuring out what the appeal is to the collectors. Generally, I have a tendency to sew simple pattern features. When I’ve looked at DOLLS magazine, I’ve seen styles that I’ve liked. I’ve come up with ways to create something similar, and have been inspired by it. I am influenced by DOLLS to come up with my own attempts to make lavish costuming or something more sophisticated.”

When the Canadian doll artist saw an Eve doll by Bunny Morris and Paul Jackson, inspiration struck her. It wasn’t like a thunderbolt, but rather a dragon’s fire breath. “I made a Daenerys Targaryen doll from the Eve doll. I thought she was pretty fabulous. I studied her outfit very carefully and thought I had replicated it quite successfully,” Norton said. The Mother of Dragons joined the cast of characters that populate the April Norton dolls.

Sometimes, Norton does have stars in her eyes (she has made a Bowie homage doll and this “Game of Thrones” queen). Mostly, though, she coaxes forward dolls that reside in her mind alone. “I am a die-hard porcelain doll artist. I make my dolls from molds, and hand paint their faces, including their eyes. Additionally, I enhance their body’s contours, fingers, etc. The majority of dolls I create are often from molds by Dianna Effner,” she pointed out. “Her charming sculpts are the most fun to paint, especially the little ones. I can’t help but smile or giggle as I’m painting their endearing faces. It is important to me that my creations sparkle. By that, I mean that they need to have personality. They need to connect with me.”

Luckily, for Norton and the world, her April Norton dolls do speak to her and to the public at large. And, take it from me, loving her dolls and blogging about them is not a guilty pleasure. It is just a pure pleasure! 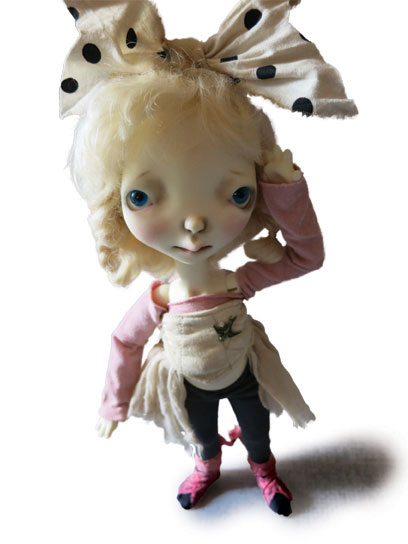 Hope — That Thing With Feathers